Home › Amma Lies › Amma & the Tsunami: What Really Happened During the Disaster

Amma & the Tsunami: What Really Happened During the Disaster

“I read your post titled “The Real Mata Amritanandamayi” and felt inspired to write something of my own. Perhaps you can post it, if you like. It is my experience of being in Amma’s ashram during the tsunami, which struck India on December 26, 2004. I was there for the holidays and was able to directly witness what happened as the disaster unfolded.

I remember Amma had just come for darshan when rumors began spreading that the sea had drastically receded. When Amma was informed, she immediately began instructing the evacuation of the ashram as well as the surrounding villages. There was no tsunami warning system in place then. So, messengers ran up and down the Beach Road to spread the word, telling people to immediately evacuate and get to higher ground.

Then, within 10 or 15 minutes, a huge wall of water pounded the coast and began flooding the strip of land between the Kerala backwaters and the Arabian Sea where the Amritapuri Ashram is situated. 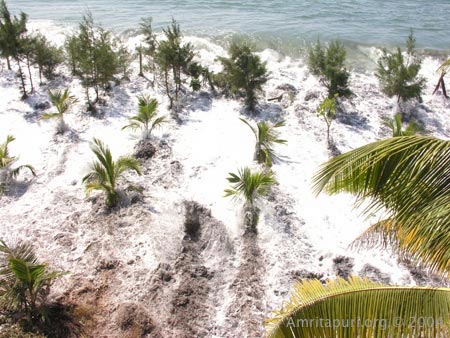 An aerial view of the water hitting the Ashram’s coast. The level of the water almost engulfed the trees. Photo credit: amritapuri.org

The first step was to get all the people off the island and safely to the other side. Amma herself was down in on the ground—waist-deep in the flood-waters along with the ashram residents—tying long ropes from building to building to serve as guide ropes for people to cling to as they made their way through the flood-waters towards the mainland. These guide ropes ended up being real lifesavers. Many of the villagers do not know how to swim. Without them, I am sure hundreds of people never would have made it to the safety of the mainland. I remember Amma standing on the temple steps, sending people through the flood-waters via the guide ropes. Knowing that it would be difficult for family members to locate each other on the mainland, Amma would make sure all the family members were together before sending them across.

As it was the Christmas holidays, some 20,000 people were visiting the ashram. I firmly believe it was only due to the methodical, systematic evacuation plan set up by Amma that there was calm amidst the chaos.

Along the shore to the backwaters, there are very few ports for boats to tie up and dock. The Ashram has perhaps the largest such port. Amma mobilized all the local boats to ferry villagers and devotees across the backwaters. The ashramites ran from house to house, escorting the villagers to the ashram port so they could be ferried across to safety.

On the other side we were all taken to Amrita University’s BioTech building. Amma had the ashramites setting up refugee camps all throughout and around the university. The BioTech building became like a base-camp. It was full of distraught families with small children and elderly people. As per Amma’s instructions, the ashramites setup makeshift kitchens and immediately began cooking for the refugees. Any foodstuff, sacks of rice, water, plates and utensils that had not been damaged or lost in the floodwaters were ferried across the backwaters from the ashram to the base-camp. Brahmacharis and other male residents went back to the island to assess damage in the village and look for survivors. By evening it was clear that hundreds of houses had been destroyed and thousands of villagers were now homeless.

Normally, when one is injured, before even thinking of helping other people, the natural reaction is to help oneself. Amma did not think like that. In reality, the Ashram itself was a victim of the disaster, but before helping herself—or even the ashramites—Amma focused on the villagers. The ashramites didn’t have toothbrushes, toothpaste, spare clothing or any basic amenities. Even all the straw mats that were kept aside for us visitors were given away by Amma to the villagers. I admit that it was hard sleeping like that, but I understood that in a few days I would be able to return to the warmth and safety of my home, whereas the villagers now had absolutely nothing. Everything they owned—in many cases, even their savings—had been washed away. Touched by their plight and inspired by the selflessness of Amma and the ashramites, many of us visitor began to pool together basic amenities—soap, toothpaste and medicines… anything we thought would be useful for the villager refugees.

The government had declared the island where the ashram and surrounding villages are located a disaster zone, limiting provisions from coming in. The floodwaters had also taken out the island’s electricity. The refugees had nothing; they were homeless and totally forlorn. Women didn’t even have clothing. Knowing that the women were in need of clothes, Amma immediately mobilized bolts of cloth from the Ashram storeroom to make saris for them. Because the Ashram has its own tailoring facility, there was a good stock of cloth. Therefore, Amma decided the most efficient way to get clothing to these people would before the Ashram to produce it. She decided to have a “tailoring factory” set up in the ashram’s temple. This consisted of several sewing machines running non-stop at full speed. During the process of mobilizing the bolts of cloth to the upper part of the temple, Amma cut her foot on a rock. Even though the wound was by no means small, Amma refused to stop. With her wounded foot, Amma worked the foot-pedal to her sewing machine, sewing through the night, by the light of candles and oil lamps. 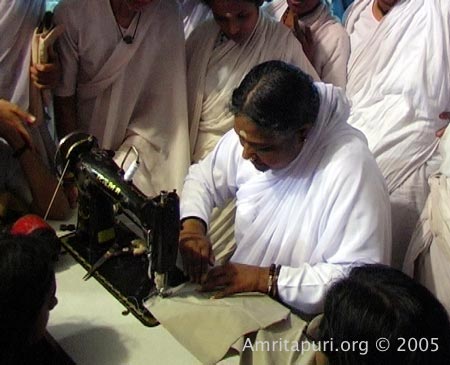 The majority of the brahmacharinis and female ashramites and visitors were tasked with cutting massive amounts of vegetables. I helped with this, as well as with washing and drying bolts of cloth that had been soaked in the flood so that they could be made into saris. There was a schedule to assist with serving food, as it was an around-the-clock effort to serve meals to refugees. Many of us only ate one meal a day to make sure that there was enough food for the refugees.

The morning after the day of the tsunami, Amma visited the temporary shelters and camps and sat with the survivors and mourned with them. She cried and grieved with the women and children who lost everything. Some children were totally orphaned and had no family members left. Amma comforted them and laid them down on own her lap to sleep. In fact the ashram took in some of these children. It was touching to see Amma become one with the grieving families. Even in the most desperate of moments, Amma was able to give herself for others.

At one point, one of the brahmacharinis asked me to bring Amma a glass of water. I felt shy to do so, but she prodded me forward, explaining how Amma had neither eaten anything nor drunk anything since the disaster struck 24 hours before. I timidly approached Amma with the glass. When Amma saw me she smiled, but shook her head no and said, “How can I eat or drink anything before the needs of these people are taken care of.”

On day three, some of the ashramites went to Azhikkal Beach to attend a huge funeral for those killed in the tsunami. There were dozens of funeral pyres. Amma had brahmacharis and brahmacharinis assist with the funerals by reciting prayers and conducting final rites. I was overcome with emotion when I saw young boys performing the final rites for their elders. Because of the trauma, many of the boys had to be assisted by the brahmacharis in order to complete the traditional ceremonies.

It wasn’t for a few more days that we returned to the ashram—nearly a week in total. Amma must have known that the ashram was in need of repair. She had seen herself how in some places it had been three-feet deep in water. However it was only after all the ceremonies were completed and the safety of all the villagers had been ensured, that Amma allowed the ashramites and devotees to return to the ashram. The ashram was a mess—mud and filth and water damage everywhere. I was amazed at how Amma had been able to just forget about the ashram’s problems in order to help the villagers. Amma and the ashramites themselves were “disaster victims,” but they had put themselves aside and dedicated themselves to helping others.

The extensive relief-and-rehabilitation work conducted by Amma’s Ashram in the two years following the disaster is a matter of public record. The Ashram built 6,200 homes in Kerala and Tamil Nadu, and 96 more in Sri Lanka. Amma also provided 700 boats, engines and nets to fishermen who had lost theirs in the disaster. Perhaps most amazingly, the Ashram also built a bridge to the mainland so that if there is ever another such disaster, people can cross to safety without relying on boats. The help provided by Amma and the Ashram in truth cannot be expressed in words. My “holiday” at the ashram and witnessing how Amma give herself so selflessly to others was a life-changing experience for me. All my gratitude to Amma.” 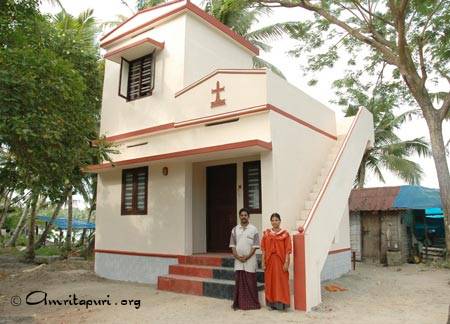 Seena and Manmuthan, the recipients of this new house said, “My original house was destroyed by the tsunami and we are currently living in a temporary thatch shack on our property where the new house is being built. Now that we are getting this house we feel happy and at peace. We want to come see Amma to express our gratitude for all she has done for us. Compared to our old house, the new one is beautiful…excellent!” Photo credit: Amritapuri.org

By the end of 2006, after two years of relief effort, Amma’s Ashram had spent $46 million U.S. (Rs. 200 crores) on tsunami relief. Below are some of the relief works done by the Ashram. The details I have taken from the Ashram’s booklet Embracing the World:

* Built evacuation bridge at a cost of 1.32 million—all paid for and constructed by MAM.

* Conducted Children’s Camps, teaching yoga, English and Sanskrit to children from tsunami-effected areas. More than 10,000 girls and boys attended. They were also given swimming lessons.

* Distributed 15,000 saris and dhotis in Sri Lanka to victims.

* Provided free education and vocational training to 2,500 young people, including 800 nursing assistants trained at AIMS, and 1,000 automobile drivers and security guards and 700 women trained in tailoring and handicrafts.

* Served 10,000 meals three times a day at relief camps and at 18 food counters in the villages near Amritapuri for months.

* Provided intensive care to villages and relief camps via 11 ambulances with teams of doctors and nurses.

* Provided counseling through teams of psychiatrists, psychologists and social workers,

* Connected the temporary shelters with AIMS via telemedicine satellite link.

* Provided free fallopian tube recanalisation for women who had lost their children in the disaster but had previously undergone tubal ligation as a form of permanent contraception. Six women underwent the procedure—all six have since given birth—three had twins.

Welcome to “The Amma Scandal”

It’s likely that you have arrived here because you’ve heard some of the rumors, scandals and allegations of fraud regarding Amma (Mata Amritanandamayi) and her charitable organizations. So have we. This blog represents our search for the truth.